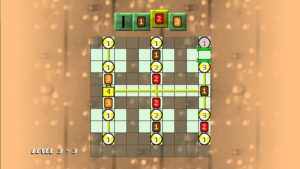 as a little more than five years ago when I participated in my first Dream Build Play game development competition.  I created an electronics puzzle game called Resistor, using the XNA game development framework.  That was the first time that I developed a game for a competition, which I eventually released on the XBox 360 console.

Recently, Microsoft announced that they are bringing back the Dream Build Play competition, which runs through the end of 2017.  This time, we are free to use any game development environment, as long as our game targets either the Windows 10 or XBox One platforms.  I have quite a bit of experience with Unity, and it can create builds for both platforms.  Therefore, Unity is my choice for game development engine for this competition.  I’ve been creating games in Unity since April 2013, when I entered my first Ludum Dare competition.  Since then, I’ve participated in game jams on a monthly basis. 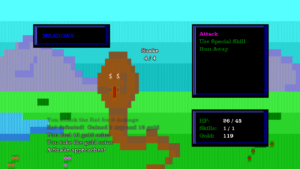 always wanted to make a sequel to my TTY GFX ADVNTR game, which was the last game that I published on XBLIG for the XBox 360 console.  It was the first game that I actually sold on a major marketplace and it made a small profit.  The game was a menu driven RPG, where the player would battle various monsters and slay the dragon to rescue the princess.

Since this game will be targeting both PC and console, I decided to create an action RPG, instead of doing a menu driven game again.  I can still use a lot of RPG concepts, while making the game more than just navigating menus.  This style of game was popular in the 80’s and 90’s, but I think there has been a lack of games in this genre lately.  I will probably use a lot of the concepts that I learned while developing Ancient Adventure, which was an action RPG that I developed for Ludum Dare 36.

I started working on this game last month.  I was able to model a simple character in Blender.  The character currently has three animations, which are standing, walking, and attack.  I store the left thumbstick in a Vector3 variable, which I use to translate the character in the game world.  If the magnitude is greater than zero, then the walking animation is played, otherwise the standing animation is played.  Based on the x and z values, I determine the rotation of the player.  I decided to make the character face only in four directions, similar to classic action RPGs.  However, it seemed awkward to instantly snap between the 90 degree rotations, so I set rotation targets so the character now smoothly rotates between them.

When the attack button is pressed, I set an attack delay countdown value.  While the countdown is active, the player is prevented from moving.  The character material is also set to red for now, to show when the attack is active. 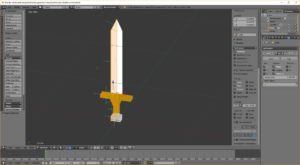 I also modeled a sword in Blender.  I am keeping the sword as a separate game object, which I can instantiate and parent to a weapon holder bone in my character’s armature.  I have a separate collider for the blade of the sword, which will eventually be used for determining collisions with enemies.

I have a lot of plans for this game, but I will probably not get around to implementing everything.  I would like to have a generated world, which is stored in a SQLite database, similar to my Manifest Universe game.  Since most of the games that I’ve developed over the past few years have been developed over a weekend for 48 hour game jams, I think Dream Build Play will give me a good opportunity to fully develop a game resulting in a better  gaming experience.