I spent about an hour and a half working on my new Unity game for Dream Build Play 2017.  It’s been a few weeks since I last touched it, since I’ve been busy with updating the web site and other game jams.  A few days ago I decided to change the title of the game to Myriad of Legends, which keeps the “My” of Mystic and “Ad” of Adventure.  Then I thought the title was too long and sounds too much like League of Legends, so I decided to change the title to just Myriad, which I think sounds better.  The only problem is that just a one word title will make it harder to find with search engines.

This time I worked on enemy movements.  I made the Enemy Movement a separate script that is assigned to my Enemy prefab.  I really wanted to keep things like movement countdowns separated from the core enemy attributes like health points.  I keep an angle float variable, which holds which way the enemy should be facing, and I update the rotation on every frame using Quaternion.AngleAxis, using the angle and Vector3.up as parameters.  This is to ensure that the enemy keeps facing the same way, since the rotation can be affected by the physics engine.  Alternatively, I suppose I could have locked the Y rotation on the enemy RigidBody.  I have a function called setRandomDirection, which sets the enemy angle to either 0, 90, 180, or 270.  This is done by generating a random integer from 0 to 4 (exclusive), then multiplying by 90.  I have a countdown which calls the setRandomDirection every two seconds.  Also, if the enemy collides with another enemy, I add 180 to the rotation to both enemies so that they don’t continually bump into each other. 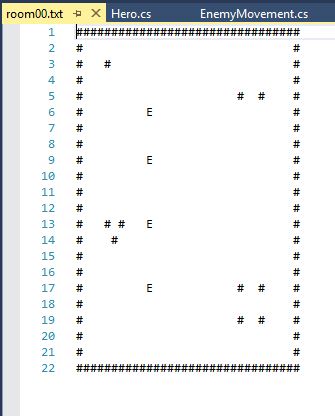 I also created a rock object, which is currently just a cube that I texture mapped in Blender.  I populate the rocks in the game world according to a text file.  This is the same process that I used for Ancient Adventrue and some of my other games.  The text file has pound signs (#) to represent the rocks.  I have the text file stored in the Resources folder in my Unity Assets folder.  Then I assign the text file to a TextAsset object in the LevelManager script that I created.  I can access the contents of the TextAsset using the .text property.  Then I use the Split method passing a new line (\n) as a parameter to get each row, and use .ToCharArray to get the character data for each line.  It’s a quick and simple way to design levels.  Later, I may convert this to something like the Tiled TMX format, which would allow me to store more information, but is a little more difficult to parse.  I also added enemies, which are signified by the letter ‘E’.  I set the enemy movement so that 180 is added to the rotation if it collides with a rock.  Occasionally, there is a bug where the enemy will continually rotate, which I believe is caused by the enemy colliding with two rock objects at once.  I need to fix it so that it will only rotate once per frame and per collision.  As I found out with some of my previous games, a collision can occur over multiple frames (Update calls), and it isn’t finished until OnCollisionExit is called. 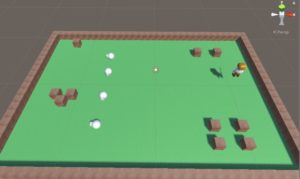 I still had the problem with the sword collision box continually colliding with the player capsule collider.  To fix this, I just made the sword collision box a trigger, so that it is not affected by physics.  I think I could have put the sword and enemies on a separate physics layer, but that could make things much more complex.  When the enemy gets an OnTriggerEnter event where the colliding object is a Sword, then the enemy is destroyed.  Probably in the next update, I will make it so that it takes away health points, and only destroy the enemy if their health falls below zero.

Finally, I got rid of the huge ground plane, and added a new ground prefab.  It is the same width and depth as as the rock, one unit in both directions.  However, it’s anchor point is on top of the model, instead of on the bottom like the rock.  This way, if I instantiate a rock and ground at the same position, the rock will sit perfectly in line on top of the ground.  The ground is instantiated for all spaces in the text file, and with rock and enemy positions.