Earlier today, I did some game development off stream.  I was working on the colors for the background.  In previous games like Note Chomper, I have synchronized the hue with the music volume by calculating the RMS value of the AudioSource on the game object playing the music.  It is a nice effect, but sometime appears flickery.  I tried it for this game, and it just didn’t look great.  I tried modifying my code so that it uses frequency instead using the AudioSource GetSpectrumData method, but it still didn’t look right to me.  I also tried setting the hue to the sound of the cannon being shot, but I didn’t like it because it would be one hue (red) at the beginning while the balls were being shot, but then another value (blue) for the rest of the time.  I ended up settling on tying the hue to the current combo value.  I clamped the range from 0 to 50 combo value, which I converted to a 0f to 1f value.  I passed that value to my script which handles setting the background material color, which then sets a target hue.  The hue can be converted to a color using Color.HSVtoRGB, passing the hue as the first parameter and 1f for the second and third parameters.  I then converted my 0f to 1f value to a value in the range of 0.5f (180 degree hue which is cyan) to 0f (0 degree hue which is red).  So as the combo increases, the target hue value moves backwards from cyan to red on the ROYGBIV scale.  I also have value specified for speed of transitioning, so that it is a smooth change in color and it doesn’t jump directly from one hue to another.

I also updated the cannon model.  It didn’t look right before, because it was too small for the balls that it was shooting.  I added a cylinder at the bottom, for where the balls should come out.  I used the boolean modifier to “drill” another smaller cylinder hole in the middle.  I had to ensure that the hole was big enough to give the appearance that the balls were coming out of it.  I also had to significantly increase the size of the model, so much that the top is no longer visible on the screen, but I think that’s not really a problem. 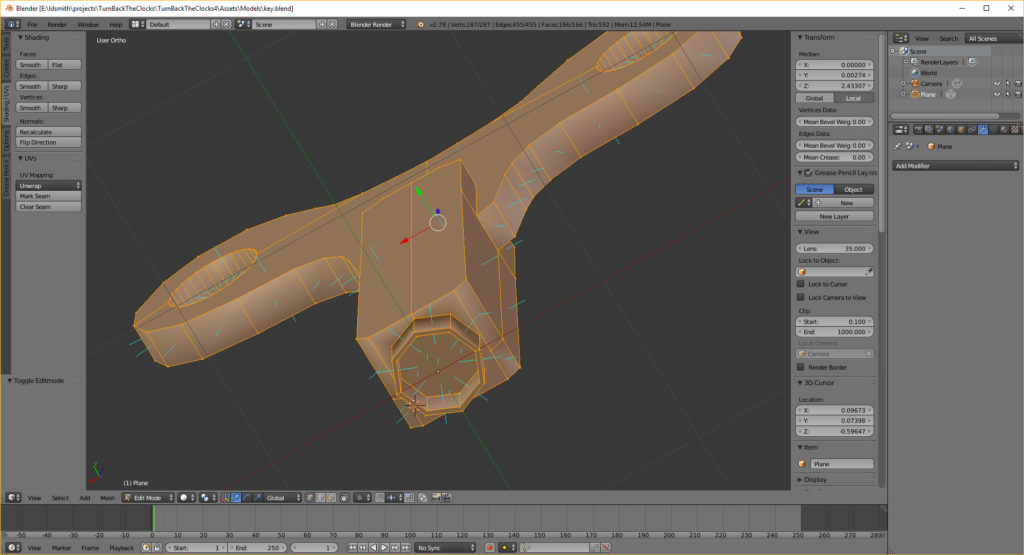 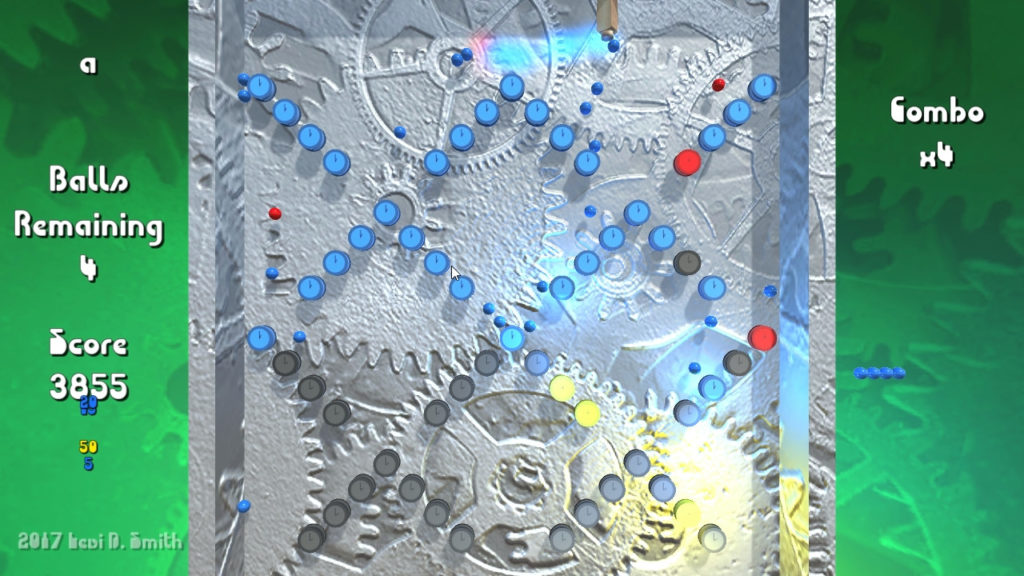 Finally, I added multiple levels to the game.  To do this, I created text files which contain the layout of the clocks on the levels.  I just used an ‘O’ to represent each clock.  I may end up using other letters for future objects to be added to the game.  I put these text files in the Resources folder under Assets in my project, which allows me to assign them to a TextAsset List that I defined in my LevelManager.  I added new parsing code which loops over each line in the text file (rows) and each character in every line (columns).  Based on the row and column position, the clock is Instantiated in the appropriate location.  It’s always important to subtract the row from total rows in the files, otherwise the level layout will be upside down.

Adding a Next Level button was a trivial change.  I added a new function in my Level Manager to handle incrementing the level number, which loops back to zero if it is equal to or greater than the level List size.  I also added a function which deletes all of the objects that are children of the Room object, which is the parent of all of the objects that are Instantiated for a specific instance of a level (the clocks, the cannon, etc).

Another problem that arose from the new level layouts is that sometimes the balls would get stuck between two clocks.  I added code which compared the velocity of the RigidBody of the ball to Vector3.zero (not moving), and destroyed the ball if those are equal.  That worked at first, but I found that when the level restarted, all of the balls were being destroyed.  Apparently on the first Update, the ball’s velocity was getting returned as zero.  To solve this, I added a countdown, which added Time.deltaTime for every frame that the velocity is zero.  Otherwise, it would set the coutdown back to zero (the ball is moving).  Once the countdown reaches a defined value (I used 1f, which is one second) then the ball is destroyed.  I need to go back and add a puff of smoke (probably the same one that I used for the cannon) when the ball is destroyed, so that it doesn’t look like the ball magically disappears.