Over the Christmas holiday, I’ve been working on wrapping up the Turn Back the Clocks 4 game for my Dream Build Play 2017 entry. The three things that I planned to accomplish were creating more levels, XBox Live integration, and updating the leaderboards.

Creating additional levels was my first priority. Fortunately, with my level parser code, making new levels is a trivial task. I use a text editor (Notepad++) to lay out all of the clocks, mines, and slot in each level.  For the first level, I wanted to just introduce the player to the main objective of the game, which is activating the clocks.  So the first level is just filled with clock objects.  The other two mechanics in the game are the bonus wheels and mines.  I wanted to introduce these to the player each in a separate level.  I decided to introduce the bonus wheel in the second level, because I consider it to be a positive stimulus.  If you hit the slot target with a ball, then you get the bonus well.  Therefore, I introduced the mines in the third level, since it has a negative result.  Hit the mine with a ball and it explodes.  Using text files to lay out levels has worked really well in my other games.  It eliminates the need for a bloated level editor and the levels can be quickly and easily changed.  The downside is that there is only so much information that you can store in a single character.  However, it works well for games like this where the objects don’t have any additional properties. 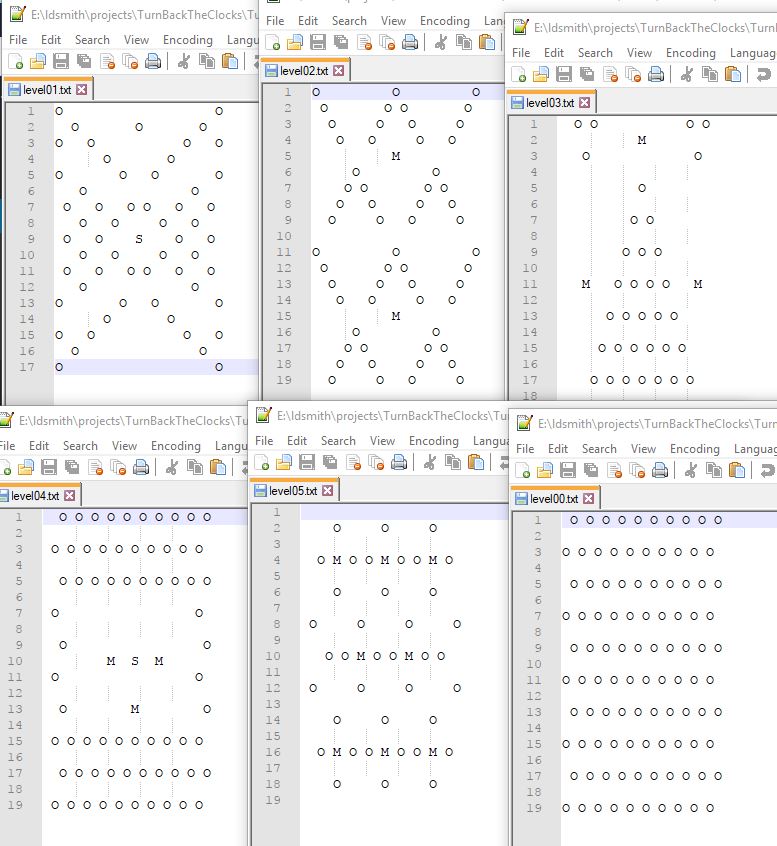 The one thing that I really considered when making levels was the amount of interactivity between the objects in the level.  Some levels I had to rework just because it was possible to shoot a ball to the bottom without it hitting anything.  Another problem arose when I would have a bonus slot on the level without anything above it, so that the player just needed to line up the cannon with the slot to get the bonus every time.  With a lot of the levels, I had to do a lot of trial and error by playing each one multiple times.  I didn’t want the bonus wheels activating all of the time, but I didn’t want it to be so hard that that it was rarely activated.  I tried to make it so that the bonus was activated about once each time the level is played.  Due to time constraints, I currently have six levels, which feels about right for this competition.  I had originally planned to make twenty levels, but I think the player would have a good understanding after six levels.  After the competition is over, I would like to go back and add more levels.

I wanted to fix the leaderboards in the game, so that the scores were stored on a per level basis.  Currently, the game calls a PHP file on my server with the player’s name a score as parameters after each level is completed.  To separate the scores by level, I would need to modify the scores table in my MySQL database to add a column to hold the level number.  This wouldn’t be too difficult, but I would also need to rework the PHP code to accept level number as a parameter.  Also, it appears that I may not be able to send an HTTP request to my server when my game is deployed on the XBox One.  I’m guessing the UWP applications may be sandboxes from contacting any external servers.  There is a way to store scores for a leaderboard using the Microsoft infrastructure, but I really haven’t gotten a chance to try it yet.  If I do eventually use the Microsoft leaderboard services, I would definitely have to consider modifying my code so that I could switch between using my server or Microsoft’s leaderboards.  It seems like it should be possible, since I would just need to add an “if” statement in my Leaderboard class to control where the name and score data is sent.

The most important change that I needed to make was adding the XBox Live services.  Actually, I believe I could submit my game as a Windows 10 desktop app and not integrate XBox Live.  However, it is required to publish to the XBox One Creator’s platform.  I’ve been through this process before with my first XBox’s Creator’s game, Kitty’s Adventure.  The first thing that I do is make sure that the game is playable with an XBox controller.  To do this, I had to add additional button mappings in my Unity Input settings.  I added virtual buttons for each of the colored buttons (A, B, X, Y).  I found this diagram a few months ago, which is a good reference for how each button on the XBox controller maps to each joystick index.  I noticed in the past that when a Unity game is deployed on the XBox One, the UI controls don’t seem to work.  So to get around this, I add button icons next to each of the Unity UI buttons, and then write Input handler code, which calls the same method that is executed from the button press action.

The rest of the XBox Live integration involves little actual programming.  The general steps for XBox Live enabling a Unity game can be found in the Windows Dev Center documentation.  Of course, the build target must be set to UWP, which generates a Visual Studio project.  Here are some pitfalls and gotchas that I’ve experienced from this game and my previous game. 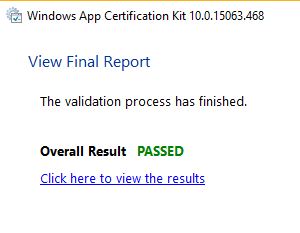