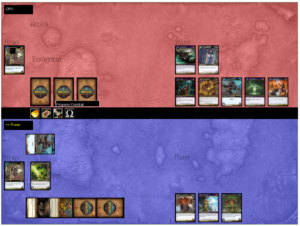 This is a card battle engine that I wrote in 2008.  It is a completely functional game with limited opponent AI.  The game gives the player the ability to select a card deck to use, but the actual deck builder was never implemented.  Sound effects are played as the player places cards and attacks their opponent.  This game was implemented as a Java applet.  The Java Image libraries were used to draw the cards in different rotated positions.  All of the opponents cards are drawn inverted.

Java Runtime Environment must be installed and active in web browser