Installed two new cases fans because the other ones were getting so loud that it was bothering my hearing.  These two new fans are much quieter and take up less space in my computer case.  The loudness rating on the box is 15 dBA.  Thankfully, I measured the size of the fans before I ordered them.  Most fans these days are 120mm, but my requires 80mm fans which is measured across the square frame of the fan.  The previous fans had an unneeded wires and a metal plate for switching the light off and on.  The lights on the new fans are very bright and has just one wire for plugging into the power supply.

Below are the components that I used to rebuild the system that I originally put together in 2005.  I had originally just intended to replace the broken IDE DVD drive, but all of the current DVD drives for sale are SATA.  My motherboard did have SATA connectors, but my power supply did not have SATA power cables.  I changed the power supply to a new one with SATA power cables, and I went ahead and installed a new SATA hard drive since the IDE hard drive was nearly out of space.  My motherboard and BIOS could not detect the new DVD and hard drives, I’m assuming because it uses a old SATA specification.  This led me to install a new motherboard and CPU, so that I could use the new drives.  Since the old graphics card was AGP8X, I went ahead and installed a new graphics card since the motherboard only has PCI Express.  The memory was upgraded as well, since the new motherboard uses DDR3.  After wiring the power and reset switches, the rebuilt system booted up successfully.

Below are the specifications and images of the computer I built in 2005.  This system has a bright yellow case with glowing blue case lights. 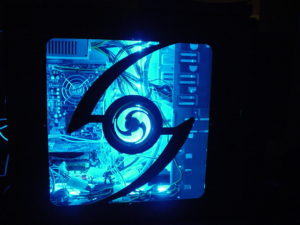 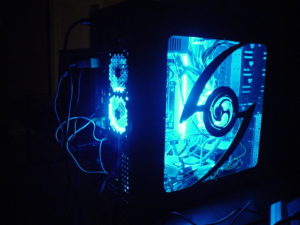 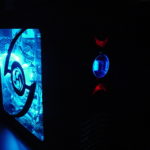 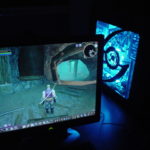 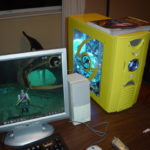 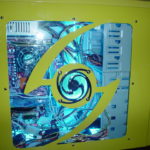 Below are images of the computer I built in 2003.  This system has a black case with glow green case lights. 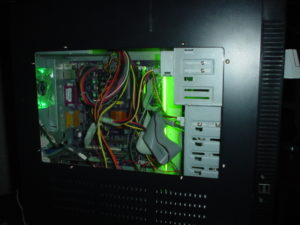