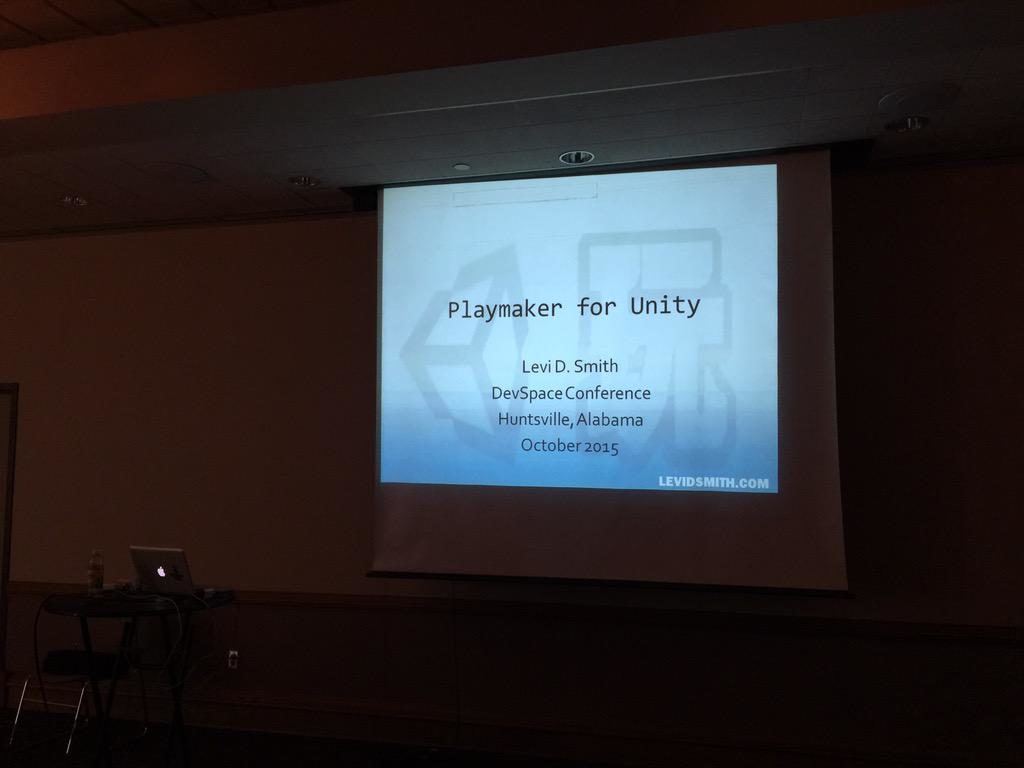 I gave two talks at the DevSpace technical conference in Huntsville, Alabama last weekend.  The conference was organized by frequent CodeStock speaker Chris Gardner.  I have a lot of respect for someone who starts a technical conference on their own from the ground up.  I had a great time at this conference as it was my first time speaking at a conference outside of the Knoxville, Tennessee area.  Huntsville is a very nice city in northern Alabama.  I had visited Huntsville about two years ago for a sporting event at the Propst Arena at the Von Braun Center in downtown Huntsville.  It was a great experience to return and speak at the conference center at the same location.

I stayed at the Embassy Suites, which is right next to the conference center and is connected by an enclosed bridge.  This was one of the nicest hotels I’ve ever stayed and the conference discount made the nightly price reasonable.  In the conference center, they have flags hanging from the ceiling representing all of the 50 states.  I noticed that the Georgia flag was the old blue one that was used in the late 90’s.

The first morning started out with a keynote from another speaker from Knoxville named Alan Stevens on the lower floor of the conference center.  The individual sessions took place on the upper floor.  A nice game room was provided by a local arcade shop.  I was able to take in a few games of Street Fighter II Hyper Edition, Galaga, and Star Trek pinball between sessions.  Best of all, the arcade games were set to free play.  Free T-shirts were given out by DealNews as well.

I attended sessions by fellow Knoxville Game Design member Michael Neel on Not Teaching Children Code and an Introduction to Unity.  There were other interesting sessions that I attended on network packet monitoring, functional code, REST best practices, prototyping mobile apps, and Kanban with Scrum.

Promoting Your Game with Social Media

My first talk was late on Friday afternoon.  I covered the various social media sites that can be used to promote a game and I also covered the analytics of each of the sites to measure your audience.  Many of the social media sites can be used to promote any product.  I also covered a few sites that were devoted specifically towards promoting games.  My talk did spark a lot of discussion from those who attended the session.  One person said that they found the ability to schedule a tweet in TweetDeck very helpful.  There was some interest in using the Twitter APIs and OAuth authentication.  I had written some code months ago in Ruby to pull data from Twitter using OAuth.  There was one question about when is the best time promote a new game and my best advice was continually promote through the development process so that you build a following.

My second talk was early Saturday afternoon on using Playmaker to develop Unity games.  Mike’s talk the previous day was a great introduction for my presentation, as it meant I didn’t have explain all of the basics of Unity and hopefully session attendees were already a little familiar with the Unity terminology.  In this presentation, I gave a demo of how to create a space shooter using Playmaker.  I had five basic steps, and I already had pre-built scenes for each step in the development process.  This made explaining things much easier, as I didn’t have to worry about doing all of the technical steps live, which can slow down the pace of the presentation.  Earlier in the week, I made a final polished version of the space shooter with models imported from the Unity Asset Store and many other special effects such as lighting, a scrolling background, and a tail renderer for the bullets.

In my opinion, the most difficult part of presenting is keeping track of time.  It also doesn’t help when your talk doesn’t end at the top of the hour, since there are usually never clocks in the room and your PowerPoint presentation in full screen covers the clock in the system tray.  The clock on my phone didn’t help, as it kept auto-sleeping after a minute.  When I’m sitting in the crowd during a session, the time seems to go by so slowly and I start thinking about how it’s going to be impossible to talk for an hour.  However, whenever I get up in front of a crowd everything seems to come naturally and the hour will fly by in what feels like just a few minutes.  I do like to cover all of my main points on my slides first, and then the remaining time will determine how in-depth I go into explaining the demo.  I did remember to bring a bottle of water with me this time, since it is really easy for your mouth to go dry while talking for an hour.

I had a great time at DevSpace, and I hope the conference continues to grow in the upcoming years.  I was really happy to be a speaker at a new conference to help get it off the ground so it will be held again for many more years to come. There is a severe lack of technical conferences in the southeastern United States, so I will do whatever I can to help establish new conferences. My only complaint was that the WiFi was spotty at some locations in the conference center.  My social media talk relied heavily on showing the different sites on the web, so I had to make sure that all of the sites were pre-loaded in my browser before I started my talk.  The projectors were a little old, but fortunately I packed my MacBook VGA adapter that I bought years ago and never used.  I definitely look forward to attending DevSpace 2016 next year!