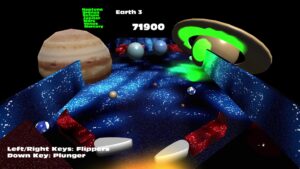 Earthball is my submission to the mini Ludum Dare 42 event.  Use your flippers to prevent the earth from falling into the sun.  Hit the planets for a huge score!

After a less than impressive finish in the LD26 competition, I decided to develop a game for the the mini LD42 called EarthBall. I now have a little more experience with Unity after writing Amish Brothers for LD26 and Genetic Disorder for #1GAM, but I’ve still got a lot to learn.

When I saw that the theme for mini LD42 was the destruction of the Earth, I thought about the ending scene in Men in Black where the entire galaxy was contained in a sphere, which turned out to be just a marble used in a game of marbles.

Instead of using the entire galaxy, I decided to just focus on Earth. Marbles isn’t a very interesting game, so I decided to create a pinball game, since I’ve never written one before. Using the Earth as the ball and having it fall into the sun if missed by the flippers seemed to fit the theme perfectly.

I found a great tutorial video by nickdingle which stepped me through the process of making a pinball game in Unity. Of course, I wrote mine from scratch using C Sharp instead of Javascript, and only used the videos and examples as a guide. Now that I had a working pinball game, I needed to make it more interesting. The bumpers were dull, so adding planets instead for bumpers seemed to be a logical choice.

There seems to be a running educational theme in many of my games, so I decided to do some voice recording so that the name of the planet is called when the Earth collides into it. I did this using my USB headset and Audacity. I gave it more of a robotic sound by using a method explained in this video by Maniac Metro C0p. First, I changed the pitch by -25, Duplicated (Ctrl + D) twice, changed the 2nd layer pitch by 10, and the third layer pitch by -10.

As far as the graphics go, I created the starfield background using this Gimp tutorial. Next, I created the title graphics in Blender using this method described by 5teven94. I also added lights that flicker when the plunger is released and when the planets are hit. On the title screen, I added the option to disable the flickering lights for those who may be sensitive to it.

Finally, there didn’t seem to be any real objective to the game so I added a score so that points are awarded when a planet is hit. To give the game a little more of an overall objective, I added a 50,000 point bonus for hitting all of the planets. I decided to add the points scored and planets hit as displays at the end of the playing field like a pinball machine.

So like most of my games, EarthBall was a learning process. The day that I don’t learn something from making a game is the day that I quit making games.