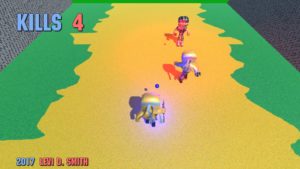 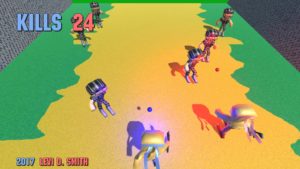 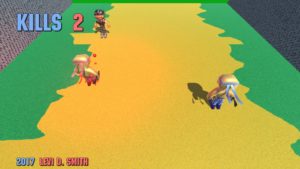 This was a simple proof of concept game that I created in about four hours to test an idea that I’ve had for a while.  It is a game similar to the classic Ikari Warriors, but you can play as both characters.  The game is best played using an XBox controller, but any dual stick controller should work.  The left stick controls the red commando and the right stick controls the blue commando.  The left bumper button makes the red commando shoot and the right bumper button makes the blue commando shoot.  Since the two commandos work as a team, I felt that it fit the theme for the game jam.  The game can also be played with two players with the alternate keyboard controls.

After doing some testing, I found that the controls work really well for one player, until the commandos cross.  Somehow my mind naturally assigns the left stick to the left guy and the right stick to the right guy, even though they are color coded.  I’m thinking this probably wouldn’t be a problem for two separate players each controlling one commando.

One of the features I planned on adding is having a vehicle that you could put both commandos in, so that one would drive and the other would shoot.  I would like to go back and add better graphics and music, as well as making the level scroll upwards as you move forward.  Plus, I could add power-ups which could be assigned to the triggers or thumbstick press.  It would also be nice to have to way to revive one of the commandos after they are hit.