Shape Quest is an adventure puzzle game where the hero Mr. Square must avoid the enemies and collect the spinning crystal diamonds. It was developed in April 2016, and is available to play on desktop PC and through a web browser. Shape Quest was developed for the Ludum Dare 35 game development competition which had the theme Shapeshift.[1] 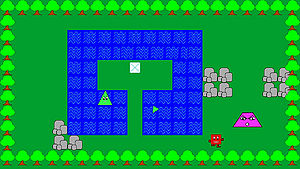 In Shape Quest, the player can move Mr. Square in four directions with the keypad. If Mr. Square is hit by an enemy or projectile the level is restarted. The objective is to collect the spinning light blue diamond. There are five total levels in the game.

Mr. Square is the hero of the game, who is a red square with a big smile with arms and legs.

The purple trapezoid moves in a vertical motion until it collides with a rock or tree, then begins moving in the opposite direction.

The yellow circle moves in one of eight random directions for two seconds, and then changes direction.

The green triangle shoots small triangle projectiles at the player.

The orange pentagon shoots in four directions and then warps to a random location.